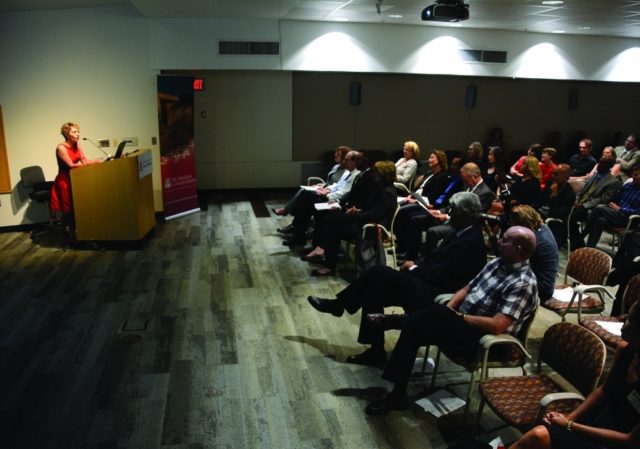 Smoking one pack of cigarettes a day for one year will get you 150 new DNA mutations. Each mutation gives you a higher risk of cancer.

Kraft’s talk, “From Bench to Bedside: Translating Cancer Research into Clinical Patient Care” centered on the basic science of cancer as well as the latest advances in immunotherapy and targeted treatments.

Though his talk was science-heavy, Kraft told the crowd not to worry, as “we’re not going to have a test afterwards.”

Kraft started with local statistics. There are 32,000 new cases of cancer every year in Arizona, and 12,000 deaths.

“Cancer is definitely a major problem,” Kraft said. “We have a chance to cure this disease, though.”

Cancer is a genetic disease, Kraft said, and since this is the age of DNA, researchers have been sequencing cancer genomes to get answers and provide personalized therapy.

“We can sequence a cancer patient’s DNA and, based on the type of mutations that are there, we can tell what caused that cancer,” Kraft said. “We’re learning about more causes of cancer by knowing that sequence.”

There are various types of drivers to mutations, like radiation, carcinogens, bacteria, genetics, diet and aging. Cancer occurs because every time cells divide, they must replicate their DNA. When the DNA replicates and grows, mistakes can be made.

While there are repair systems in the body to repair those mistakes, some mutations actually affect those repair systems, like BRCA1 and 2, which often leads to breast cancer, Kraft said.

“We know who the driver is, we know its name, we’ve sequenced it, we know the mutation,” Kraft said. “We have success targeting oncogenes. We can shrink them down to nothing.”

But Kraft said that as always, once you shut one door, another opens.

“Cancer cells are very smart,” Kraft said. “What the cancer cell does is find growth pathways around those that we blocked.”

Another reason cancer is so difficult to treat is no two cancer cells are alike.

“If you have stomach cancer, there are 10 billion cells in there and they’re all different,” Kraft said. “In a cancer cell, the chromosome stability is all out of whack. You’re really targeting a hundred different cancers in one patient’s body.”

T cells are protective cells in the body that infuse mutated cells with enzymes that eat it away. They function using receptors on their surface to recognize mutated cells, but cancers make immune checkpoint inhibitors that deactivate T cells.

CAR T-cell treatment also works with T-cells. It involves taking some T cells out of the body, infecting them with a virus to stimulate and activate it and then adding an antibody on the outside of the T cell to recognize just the tumor cells. The T cells are then replaced. They reduce tumors incredibly quick, often within weeks of beginning treatment.

“The guy who invented this treatment will probably end up getting the Nobel Prize,” Kraft said.

Finally, TCR-directed T-cell treatment involves taking specific T cells that can recognize the specific cancer, growing a large number of them in a lab and then reinfusing them into the body.

“There are barriers, but we can overcome them,” Kraft said.

“We have very few specialists in Arizona and I think this could make all the difference,” Kraft said.

Margo Turner, a patient of the UA Cancer Center for the past six years, learned about the lecture series from an email forwarded from a friend. Turner said she’s considering becoming part of clinical trials, which is why she decided to attend the lecture.

“I feel empowered when I’m fully informed,” Turner said. “Most people don’t want to think about this though.”

Turner plans to come to the other three lectures, as does Marilyn Atha, who attends a support group with Turner.

Atha first learned about the series from the Arizona Jewish Post, and went online to find out more.

“I look out for these kinds of things because I’m always looking for more information,” Atha said. “It’s useful to know what’s coming up, what’s on the horizon. This DNA sequencing—it’s great, but I look forward to the day when every cancer patient can get that done on the day they’re diagnosed.”

The next lecture will be on March 2 at 6:30 p.m. at the Tucson J, 3800 E. River Rd.. The topic is head and neck cancer with Julie Bauman, associate director of translational research at the UA Cancer Center.

Caladrius Biosciences Updates Status of Receipt of Funds for a Portion of Previously Announced...