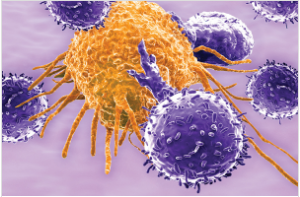 Research being done at the Universite de Montreal has a breakthrough that was once thought unlikely now on the horizon: a vaccine for cancer.

“I’m extremely optimistic about these discoveries, that this one and others in the immunotherapy field will really change the face of the treatment of cancer,” said Dr. Michel Bouvier, director at the Institute for Research in Immunology.

Bouvier said the treatment currently being researched would not prevent cancers but could help fight them.

“We’re talking about therapeutic vaccine treatment that would treat or hopefully even cure a cancer,” he said.

The idea being the vaccine is to use the body’s own immune system. The vaccine would eliminate the need for chemotherapy and radiation therapy by training the body’s t-cells or lymphocytes to fight cancerous cells as they would a virus.

“Where they could educate immune cells to recognize the signatures of these cancer cells so that they could attack specifically the tumors of a patient,” said Bouvier.

“Clinical trials of this immunotherapy will begin on leukemia patients at Maisonneuve-Rosemont Hospital within the next month,” said Bouvier. “So, some patients could begin to see the benefits of this cell therapy long before a vaccine becomes available.”

Among the cancers that could have new treatments as a result of the therapy are breast, ovarian, lung and colon, all of which are notoriously difficult to treat.

“We think that five to 10 years would be the timing where this should be possible to have vaccines against not only one, but a few cancers,” said Bouvier.

Helix BioPharma Corp. announces the signing of a non-binding letter of intent with ProMab...