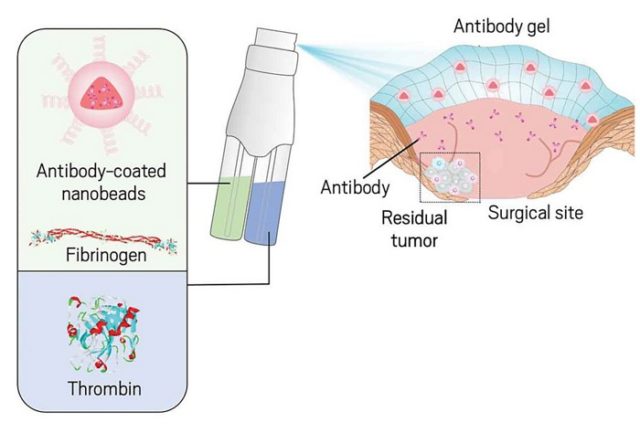 Malignant cells often get left behind when a tumor is removed during cancer surgery. Doctors turn to radiation and chemotherapy to kill any escapees, but these therapies are often toxic to patients.

An international team of researchers thinks a gel-based immunotherapy delivered to the tumor excision site right after surgery can destroy leftover cancer cells by enabling the immune system to zero in on them. The scientists have turned to a modified version of the cleaning fanatic’s favorite tool to apply the therapy: a spray bottle.

“This technology, although very early, has huge implications for the field of oncology,” says R. Bryan Bell, a head and neck cancer surgeon at Providence Health who does similar research. Imagine if you had a biodegradable material, in this case a gel, that you could implant in the surgical site and that it would minimize the recurrence of cancer, Bell says. “That would really be transformative to the practice of oncology.”

Inside the bottle are two solutions that combine upon spraying. One contains the enzyme thrombin. The other contains the glycoprotein fibrinogen along with antibody-coated calcium carbonate nanobeads. Zhen Gu, the lead researcher on the project at the University of California, Los Angeles, envisions that after cancer surgery, a doctor will spray the site from which a tumor was excised with the bottle. When combined, the thrombin will help the fibrinogen to polymerize into a gel.

After the gel forms, the beads release their antibody, designed to recognize CD47, a protein that cancer cells use to signal the immune system to leave them alone. Gu calls CD47 a “don’t-eat-me” signal. After the antibodies attach to CD47 on the surface of cancer cells, they block this signal, allowing nearby macrophages, immune cells, to initiate an immune response (Nat. Nanotech. DOI: 10.1038/s41565-018-0319-4).

To test the gel, Gu’s team did surgery on tumor-laden mice and then sprayed the anti-CD47 mixture into the surgical site. Half the mice the researchers tested saw no tumor regrowth, he says, and in further tests, the team showed that the spray didn’t just work locally—tumors elsewhere in the mice seemed to shrink after treatment.

Gu also says the gel should be able to deliver antibodies or drugs for other immunotherapy targets, so it could have use beyond CD47. But first, he says he needs to improve the stability and the carrying capacity of the calcium carbonate nanobeads.

Bell says he’s optimistic about the gel’s chances of improving cancer surgery outcomes. There are other technologies surgeons can take into operating rooms to help them find leftover cancer cells, but Gu’s gel does more.

Technologies like handheld mass spectrometers and mini-microscopes that image and pinpoint rogue cells are focused on treatment at a localized site. The gel, Bell says, “is a systemic approach that not only unharnesses the immune system on the surgical bed itself, but it also does so at distant sites.”

Stem Cell Therapy Trial at Sanford First of its Kind in U.S. For Shoulder...